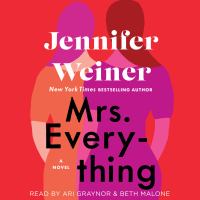 View all formats and editions (5)

Mrs. Everything : A Novel
by Weiner, Jennifer; Graynor, Ari (Read by); Malone, Beth (Read by)
Rate this title:
vote data
Click an element below to view details:

Mrs. Everything : A Novel

Jennifer Weiner grew up in Simsbury, Connecticut. She attended Princeton University, where she studied with John McPhee, Toni Morrison and Joyce Carol Oates. She is currently a reporter/columnist at the "Philadelphia Inquirer" and a contributing editor at "Mademoiselle". Her short stories have been published in "Seventeen" and "Redbook". Her freelance work appears in Salon.com, "Time Out New York", "Animal Fair", the "Columbia Journalism Review" and "Seventeen". She lives in Philadelphia and appears regularly on "Philly after Midnight," Philadelphia's local late-night television show, as a commentator. (Publisher Provided) Jennifer Weiner was born on an army base in DeRidder, Louisiana on March 28, 1970. She received a B.A. in English literature from Princeton University in 1991. In 1990, she won Princeton's Academy of American Poets prize. After graduating, she took a six-week program at the Poynter Institute for Media Studies in St. Petersburg, Florida and began her career as a journalist. She has been published in Seventeen, Salon, Redbook, Glamour, Good Housekeeping, and Elle. Her first novel, Good in Bed, was published in 2001. Her other novels include Little Earthquakes, Goodnight Nobody, The Guy Not Taken, Certain Girls, Best Friends Forever, Fly Away Home, Then Came You, The Next Best Thing, All Fall Down, and Who Do You Love. In Her Shoes was made into a movie starring Cameron Diaz, Toni Collette, and Shirley MacLaine. Jennifer's title, The Littlest Bigfoot, made the New York Times bestseller list in 2016. Weiner's memoir Hungry Heart appeared on the New York Times bestseller list in 2016. (Bowker Author Biography)