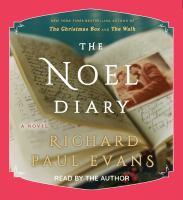 View all formats and editions (3)

The Noel Diary
by Evans, Richard Paul (Author, Read by)
Rate this title:
vote data
Click an element below to view details:

Richard Paul Evans is an American author, born in Utah in 1962. He earned his B.A. at the University of Utah. He previously worked as an advertising executive. His first story was a Christmas story written for his children. He self-published it with the title, The Christmas Box. It became a New York Times bestseller, and was made into a television movie. He has written over 31 bestsellers. Timepiece, The Locket, and A Perfect Day were made into television movies. His awards include the American Mothers Book Award, two first place Storytelling World Awards, The Romantic Times Best Women's Novel of the Year Award, the German leserpreis Gold Award for Romance and three RCC Wilbur Awards. In December 2016, The Mistletoe Secret became a New York Times Bestseller. (Bowker Author Biography)