Many Bibliomation libraries are adjusting their services at this time. Please contact your local library staff or consult their website for more information about the services they are providing.
HomeLibrary Web Site Best Sellers & Award Winners Nutmeg Awards & Nominees Charter Oak Children's Book Award Kids Catalog Get a Library Card 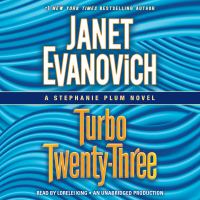 View all formats and editions (6)

Search for related items by series

Janet Evanovich was born on April 22, 1943 in South River, New Jersey. She received a bachelor's degree in art from Douglas College, which is part of Rutgers University. She was working as a secretary for a temporary employment agency when she sold her first romance novel, Hero at Large, which was published in 1987 under the pseudonym Steffie Hall. She went on to write 12 romances in five years using her real name before beginning to write mysteries. Her first mystery novel, One for the Money, became the first book in the Stephanie Plum series. She is also the author of the Alex Barnaby series, A Between-the-Numbers Novel series, Lizzy and Diesel series, Full series written with Charlotte Hughes, the Fox and O'Hare series written with Lee Goldberg, and the Knight and Moon series written with Phoef Sutton. (Bowker Author Biography)