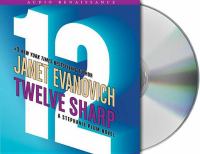 View all formats and editions (11)

The mixture of slapstick and gunplay that has put Evanovich's series about a sassy, less than competent New Jersey bounty hunter at the top of bestseller lists once again works its magic in Stephanie Plum's latest caper (after 2005's Eleven on Top). Stephanie, who freely admits her failings as a hunter of fugitives, faces a growing work backlog that threatens the continued existence of her job. Her clumsy efforts to clear some cases, along with the help of her outrageous colleague, Lula, result only in their adding another sad sack to the office payroll a forlorn shoe salesman who's talked off a ledge by Stephanie's offer of a position as file clerk. Stephanie's ambivalence toward the two men in her life becomes harder to maintain when one of them, the mysterious Ranger, is accused of kidnapping his own daughter. Countless over-the-top scenes, including one at a funeral parlor, will delight longtime fans. 1.25 million first printing; author tour. (One-day laydown June 20) (c) Copyright PWxyz, LLC. All rights reserved

In a manner almost elegant in its offhandedness, Stephanie Plum gets us up to speed on her life as a bounty hunter in Trenton, NJ; her ever-eccentric family; and her fellows in her cousin's bail-bond office. It doesn't take more than a few pages. Then someone who is mistaken for Ranger--one of the two men in and out of Stephanie's life (the other is Morelli the cop)--is accused of kidnapping his daughter. Evanovich uses all of her considerable arsenal here: wisecracking humor and set pieces about cars, neighborhoods, family matters, and the funeral parlor (now with new directors straight out of Queer Eye for the Burg Guy). Then, at one point, both Morelli and Ranger are living out of Stephanie's apartment (she flees to her childhood bedroom). Evanovich also deftly uses celebrity stalking and identity theft to sketch a quite scary bad guy, and she creates in Ranger's daughter, Julie, a spirited 10-year-old version of her mesmerizing father. The ending is downright terrifying, but the coda is soothing and features a cake with icing roses. Kids? Cupcakes? What could possibly be next? --GraceAnne DeCandido Copyright 2006 Booklist